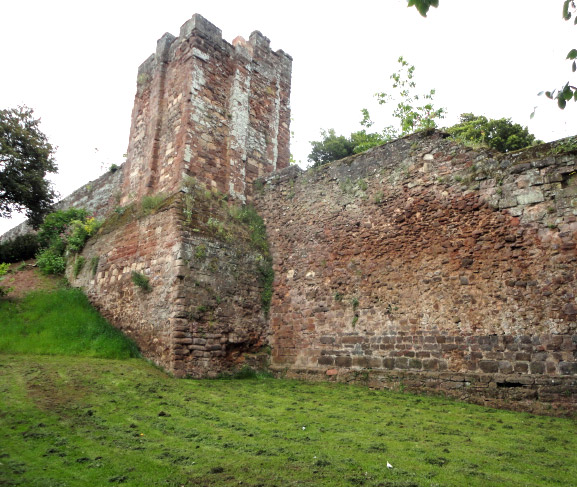 The Romans built a legionary fortress, Isca Dumnoniorum, here in AD55 as a base to conquer the south-west of England and it was in use until AD75. Early in the 3rd century they built a stone wall to protect the town and over 70% of it still stands.

When the Normans captured the city they started the present Exeter (or Rougemont) Castle in 1068 in the north west corner of the Roman wall. In 1136 it withstood a three month seige during the Civil War, it was beseiged in 1549 and then again in the 1645 during the second Civil War when it eventually surrendered to Parliamentary forces. It was not slighted as it continued to be of use as a gaol and administration centre. The County Court was built on the site in the 18th century, but the city walls, a tower and the gatehouse still stand. Athelstan's tower is late 12th century, although the present turret is 15th century.

The grounds outside the castle are open to the public but the interior is privately owned.

Danes Castle was built in 1136 to the west during the seige of Exeter. The earthworks have recently been found after being submerged under a reservoir.